Georgia is located in the Southeast region of the U.S. Its official name is “The Peach State”. Even though Georgia is one of the smallest states in the United States, it is one of the most important states and contributes tremendously to the Union.

Georgia has more than 70 colleges and universities, including the University of Georgia, Emory University, Georgia Institute of Technology, Medical College of Georgia and Savannah College of Art and Design. As you will learn below, other major industries include entertainment, lumber, fruit production, and much more.

1. Georgia has a population of over 10 million people.

2. Atlanta is the capital and biggest city in the state, with a population of over 5 million people.

3. In 1732, King George II approved the charter of Georgia, thus giving it its name.

4. Approximately 1,000 B.C. Georgia was home to Native American tribes such as the Apalachee, Cherokee, and Choctaw.

5. In 1829, Georgia became the fourth state of the Union, one of the original 13 colonies.

6. After California and South Carolina, Georgia is the third-largest producer of peaches in the United States.

8. Tennessee and South Carolina border Georgia in the north, along with the Atlantic Ocean in the east, Florida in the south, and Alabama in the west.

9. Among the forest products produced in Georgia are lumber, resins, and turpentine.

10. Georgia is home to black bears, bobcats, deer, and gophers, and you can see manatees, right whales, and humpback whales off the coast. In addition, the state is home to the bald eagle, the peregrine falcon, and the woodpecker.

11. Besides peanuts, Georgia produces the most kaolin clay in the United States.

13. A higher percentage of Black students receive a bachelor’s degree from Georgia State than from any other nationwide university.

14. Savannah, Georgia, was the birthplace of the Girl Scouts back in 1912.

15. Atlantians need more support with traffic. As of 2020, drivers spent 82 hours a year sitting in traffic, according to INRIX Global Traffic Scorecard.

16. After Georgia became the first state to lower the voting age from 21 to

17. There is a college in Georgia called Wesleyan College, the first college in the world to grant degrees to women. 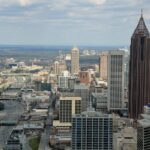