Hawaii is a small state about 2,000 miles from the U.S. mainland in the Pacific Ocean. It is the only state outside North America, the only archipelago, and the only tropical state in the nation. Along with Vermont, Texas, and California, Hawaii is also one of four states that were once independent countries.

A group of canoes arrived about 1,500 years ago on some islands now known as Hawaii. They rowed about 2,000 miles from the Marquesas Islands to get to the islands. More than 2,500 miles away, people from what is now Tahiti arrived 500 years later. Through these cultures, new traditions emerged, such as surfing, hula dancing, and exchanging flower garlands called leis.

The first king of Hawaii was Kamehameha. Until the 1880s, the islands were ruled by royal dynasties. The Hawaiian Islands became an American territory in 1898. Hawaii became the 50th state in 1959, and to this day, you can visit Iolani Palace, the only royal building in the United States.

It is believed that Hawaii was named after a legendary figure named Hawai’i Loa, who is said to have been the first to discover the islands.

Aloha is the Hawaiian way of saying hello and goodbye. Hawaii is known as the Aloha State.

The island of Hawaii is located more than 2,000 miles west of California.

The world’s largest island chain is Hawaii, the only state entirely made up of islands in the United States. However, only seven of its 132 islands are inhabited: Hawaii (also known as the Big Island), Maui, Molokai, Lanai, Oahu, Kauai, and Niihau.

Hawaii is a volcanic island. A hot spot in the molten layer beneath the crust encourages the crust to move over giant rocky slabs known as tectonic plates. As a result of the heat, the crustal rock melts and transforms into magma. New land is formed when the magma passes through the Earth’s crust and cools.

While the crust moves a little on Earth, the hot spots that produce magma do not. Hence, the hot spot remained as the crust moved, forming volcanic islands. In Hawaii’s Volcanoes National Park on the Big Island, you can see Kilauea, the state’s most active volcano. Every year, over 40 acres of Hawaii are added to the island’s territory by lava from Kilauea, which has erupted for over 30 years.

Beaches in Hawaii are known for their beauty, some of which have unusual colors. White sand covers many Hawaiian beaches, but other shores are covered in green, red, and pink sand.

Hawaii is the state for you if you like hiking, biking, kayaking, sailing, swimming, or just spending time on the beach. You can enjoy the breeze of the island while relaxing near the water. One of the big islands is home to lush tropical rainforests and stunning waterfalls. In addition, Hawaii’s coral reefs are excellent for diving and snorkeling.

You can also experience another environment in Hawaii: the dry lava of the volcano Mauna Loa is so similar to that of the moon’s surface that astronauts once walked on it for practice on their lunar journeys. In addition, Kauai’s Mount Waialeale gets 384 inches of rain a year on average and is considered one of the rainiest spots on Earth.

The hoary Hawaiian bat is the state’s only native land mammal, despite Hawaii’s thousands of plants and animals. In addition to the mongoose, rats, and feral pigs that live on the islands, humans also brought other mammals to the islands.

The islands of Hawaii are teeming with native birds like the pueo (also known as the Hawaiian owl), the noio (a type of tern), and Hawaii’s state bird, the nene (related to the Canadian goose). Monk seals, hawksbill turtles, and lizardfish live in Hawaii’s waters. From December to May, humpback whales visit the waters to mate, give birth, and nurse their calves.

Numerous tree species thrive on the islands, from fragrant magnolias and plumerias to fruit-filled ohi’a ‘ai trees. The area is also home to exotic orchids.

Hawaiian soil is considered one of the state’s most valuable resources. Sugarcane, pineapples, coffee, macadamia nuts, and flowers primarily drive the state’s economy. However, the primary income source for the state is tourism.

Some Fun Facts About Hawaii 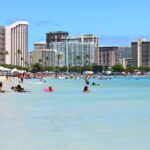