Massachusetts is the 16th most populous state in the United States of America, with an estimated population of 7,033,711. It is also home to a diverse population, with people from different walks of life and cultures. Some landmark historical events include the Boston Tea Party, which sparked the American Revolution in 1775. Massachusetts was established in the 1630s and had a rich history of agriculture, trade, transportation, and manufacturing.

1. When retreating glaciers uncovered the land, people began settling in what is now called Massachusetts over 12,000 years ago.

2. The State motto is “Ense petit placidam sub libertate quietem”, which means “By the sword, we seek peace, but peace only under liberty.”

3. The official colors are blue and gold.

4. In the north, Massachusetts is bordered by New Hampshire and Vermont; the east is bordered by the Atlantic Ocean, which runs through Rhode Island and Connecticut; and the west border is New York.

5. The state capital and the largest city is Boston, which has a population of about 695,600 people.

6. Boston was the site of the first post office in America, which opened in 1639.

7. The world’s first telephone was demonstrated in 1876 by Alexander Graham Bell.

8. A series of bloody events, known as the Boston Massacre, led to an eruption of anger in 1770.

9. As the first battle of the Revolutionary War, the Battles of Lexington and Concord took place in 1775. Paul Revere’s midnight ride has been credited with warning the colonists of the movement of British soldiers. The sixth state to join the union was Massachusetts in 1788, five years after the end of the war.

10. As the name suggests, Massachusetts derives from the Massachusett tribe, which means “near the great hill” or “near the range of hills.” These are the Blue Hills southwest of Boston.

12. The Nantucket Islands, Martha’s Vineyard, and Cape Cod Bay all offer fantastic fishing, boating, and vacation opportunities. In addition, some of the wealthiest people in the United States own properties on these islands.

13. The state has exciting wildlife, such as black bears, bobcats, eastern coyotes, moose, and white-tailed deer.

14. Crops and seafood are grown on the fertile soil of the Bay State and in its harbors (more than 1,500 miles of coastline). Twenty-five percent of the cranberries consumed in the United States come from Massachusetts.

17. A series of hearings called the Salem witch trials led to the deaths of about 20 people accused of witchcraft in the late 1600s.

18. The State House’s central portion was designed by Charles Bulfinch and constructed over three years, beginning in 1798.

19. In 1898, Massachusetts became home to the nation’s first subway system.

20. Over 18 million people visit for leisure or business each year. 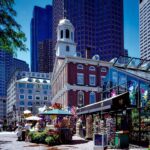