Mount Rushmore is a national memorial park located in the Black Hills in Keystone, South Dakota, United States, attracting millions of people worldwide. There is no greater honor, respect and achievement than having your face on Mount Rushmore. You would have to be legendary in a terrific way for your face to be carved on this sculpture.

1. The sculpture features Presidents George Washington, Thomas Jefferson, Theodore Roosevelt and Abraham Lincoln. So far, the United States has had 45 presidents and counting, yet not a single one has been added to the mountain.

Why are these four men on the mountain?

2. Local historian Doane Robinson came up with the idea to boost tourism in the area. The area was struggling economically after the gold rush.

3. The mountain was named after New York lawyer Charles Rushmore. Charles was in the area on a hunting trip and jokingly named the mountain after himself when his guides would not give him the mountain’s official name. Before Rushmore, the mountain was called many things by groups such as Cougar Mountain, The Six Grandfathers, Slaughterhouse, and many others.

4. Rushmore was its biggest donor before construction, with a contribution of $5000.

5. The name became official in 1930 when the US Government recognized it.

6. The material used for the project; Granite rock face.

8. Behind Abraham Lincoln’s head, there is a secret door.

12. Even though it was a very complex project and dangerous, with over 400 workers, no one died during construction. 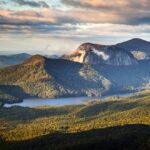