Nevada is an American state located in the West. To its northwest is Oregon, to its northeast is Idaho, to its West is California, to its southeast is Arizona, and to its east is Utah. Nevada is the seventh-largest, 32nd-most populous, and 9th-most sparsely populated state in the nation.

Researchers are still determining when people began coming to the Nevada area, but they found petroglyphs (rock carvings) up to 14,800 years old. So ancient Native American tribes, including Northern and Southern Paiutes, Washoes, and Western Shoshones, lived here thousands of years ago.

In 1519, Spain claimed the area, but after Mexico gained its independence in 1821, the land became part of Mexico. Finally, the United States seized the area after the Mexican-American War ended in 1848.

Thousands of settlers rushed to the area after gold and silver were discovered in 1859. As a result, the state of Nevada was incorporated in 1864.

Named after the Sierra Nevada mountain range, Nevada derives its name from the Spanish word nieve, which roughly translates as “snow-capped.”

Nevada borders Oregon, Idaho, Utah, Arizona, and California. This state has more mountains than any other country and is also the driest.

There are three distinct regions on the state’s land. In Nevada’s northeastern corner, hardened lava formed the Columbia Plateau. Then, over thousands of years, water slowly eroded the land, carving out its high ridges and deep canyons.

In southern Nevada, the steep Sierra Nevada mountains dominate the landscape. It boasts the largest alpine lake in North America, Lake Tahoe, located along the border with California.

Over the rest of the state, there are more than 150 mountain ranges, buttes (flat hills), hot springs, and geysers. Boundary Peak, which rises to an elevation of 13,140 feet, is also located here. The low Mojave Desert also crosses the California border into Nevada in this region.

In the United States, Nevada produces about three-quarters of the gold. Additionally, it contains silver, copper, and some of the world’s finest black opals.

Some Fun Facts About Nevada 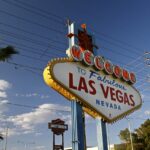