Famously known as the city of Mardi Gras, New Orleans is the largest city in Louisiana, USA. The city was founded in 1718 by French colonists under the leadership of Jean-Baptiste Le Moyne de Bienville, along the Mississippi River, long before the founding of the United States as a nation in 1776. Many French settlers arrived in New Orleans from Quebec – Canada, and France. The city was named after Philippe II, Duke of Orléans.

The city of New Orleans is a place where you can experience different cultures and traditions. The available cuisine blends Creole, Cajun, and Caribbean cultures. In addition, there are many historic sites around the area, like the French Quarter.

Discover why New Orleans is a unique city in the United States below.

2. Even though Baton Rouge is the state capital, New Orleans was the capital city of Louisiana two times (before 1825 and in 1864).

3. The city is called the “most unique” city in the United States because it had French, European and African influences, making it a mix of cultures seen in many cities in other parts of the world.

5. The Southern Food and Beverage Museum was founded in New Orleans in 2004. It is dedicated to the traditions and comfort foods of the Southern United States.

7. Attended by over 1 million visitors per year, the New Orleans Jazz and Heritage Festival is one of the largest music festivals in the world.

8. The Audubon Zoo is home to more than 250 indigenous animals and 450 species of plants.

9. The French Quarter features a historic district and a tourist area with many fine restaurants.

10. Although Voodoo culture was introduced to the city through its African heritage back in the 1800s as a religion, the practice still exists today.

11. Mardi Gras is a Christian tradition that began thousands of years ago, evolved over the years, and is celebrated in many countries.

12. Mardi Gras masks are mandatory when riding a Mardi Gras float. It is illegal not to wear one while riding. It is New Orleans’ largest celebration and annually attracts millions of people to the city.

13. Originally built in 1727 and dedicated to King Louis IX of France, the legendary St Louis cathedral is the oldest operating in the United States. However, it was damaged by fire in 1794 and was reconstructed.

14. Because of the solid French history and influence, New Orleans is the most “European city” in the United States.

15. Located in the heart of the French Quarter, Bourbon Street is one of the most famous streets in the United States, extending thirteen blocks from Canal Street to Esplanade Avenue. Anything you want and need, you can find it here – restaurants, bars, strip clubs, coffee shops, boutique stores, and so much more.

New Orleans is an excellent alternative for those of you who don’t like Las Vegas. Thanks for reading these facts about New Orleans; we hope you learned something new! 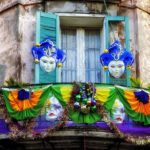