Pennsylvania, officially the Commonwealth of Pennsylvania, straddles the Mid-Atlantic region, the Northeastern region, and the Appalachian region of the United States. Delaware borders the state to the southeast, Maryland to the south, West Virginia to the southwest, Ohio to the west, Lake Erie and Ontario to the northwest, New York to the north, and New Jersey to the east.

There’s disagreement among archaeologists about when the first humans came to Pennsylvania, but they have found artifacts that are at least 19,400 years old. Thousands of years ago, Native American tribes like the Lenape, Susquehannocks, Erie, Seneca, and Oneidas lived in what is now Pennsylvania.

The British colony of Pennsylvania was founded by William Penn, a member of a Christian group called the Quakers. People of different denominations flocked to Penn’s colony because it offered religious freedom. As a result, there was an influx of German immigrants, including Quakers, Mennonites, and Amish. The Pennsylvania Dutch are descendants of these settlers, who eventually developed their dialect.

The French and Indian War lasted from 1754 to 1763 as the French and English fought for control of the land. While the English won, they became indebted due to the war. They recouped the money by taxing the colonists, which many people didn’t think was fair. The Revolutionary War began in 1775 due to anger over this action.

Two Continental Congresses were held in Philadelphia, Pennsylvania, in 1775. Then, following the decision to go to war with Britain, representatives from each colony met for the second time.

In this time frame, Thomas Jefferson drafted the Declaration of Independence. A year later, George Washington led a group of colonial forces called the Continental Army across the Delaware River to a crucial victory in Bucks County, Pennsylvania. Pennsylvania became the second state in the United States after the war ended in 1787.

During the Civil War, Pennsylvania backed the Union. One of the most significant battles occurred in Gettysburg, Pennsylvania, in 1863. The Union victory at this battle marked an important turning point toward victory in the war.

As a combination of Latin words, Pennsylvania means “Penn’s woods.” William Penn created the name in honor of his father.

According to some, Pennsylvania received its nickname because it was in the middle of all 13 colonies.

Located in the extreme southeast, the Atlantic Coastal Plain Province is a flat, low region with narrow valleys cut by streams. The city is home to the first urban wildlife refuge in the United States, Tinicum Marsh.

There are steeply sloped hills and ridges in the New England Province, which lies northeast of the Piedmont Province. Towards the west of the Appalachian Mountains lies the Ridge and Valley Province. It is primarily covered in forests.

The Appalachian Plateaus Province dominates the western and central parts of the state. It has a heavily forested landscape that includes the Pocono and Catskill Mountains and Allegheny National Forest.

Among Pennsylvania’s mammals are black bears, elk, red foxes, and white-tailed deer. The skies are filled with golden eagles and peregrine falcons. At the same time, reptiles such as eastern spiny softshell turtles, northern coal skinks, and venomous eastern Massasauga rattlesnakes live on land and slither through the brush. There are also amphibians in Pennsylvania, including the Allegheny Mountain dusky salamander and the Valley and Ridge salamander.

Over half of Pennsylvania is covered in forests, including eastern white pine, red maple, sycamore, and eastern hemlock (the state tree). In addition, there are many wildflowers in the state, including wild bergamots, black-eyed Susans, and Penngift Crownvetches.

Coal mining is a major industry in Pennsylvania. Additionally, it has the country’s largest reserves of anthracite coal (a challenging, pure variety).

Some Fun Facts About Pennsylvania 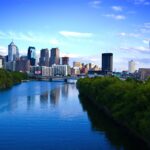