Seattle is a major city in the United States, located in the state of Washington. Like many cities in North America, Seattle also suffered from a significant fire over 100 years ago. Still, today, the city stands proud and strong as one of the most technologically advanced cities in the world, home to many Fortune 500 companies.

There are many things to do around and in Seattle, such as hiking on Mount Rainier, playing golf or taking an open-top bus ride across town, among many others.

Below you will discover 15 interesting facts about Seattle.

15 Educational and Cool Facts About Seattle.

1. Seattle is spoken about only sometimes, like other big cities such as Atlanta or Houston. Still, Seattle is a major international city, with a population of over 753,675.

2. The first European to visit Seattle was an English explorer by the name of George Vancouver in 1792, also the same man to first the Vancouver area in Canada.

3. The Space Needle building is one of Seattle’s most iconic landmarks and a visitor attraction for tourists. It was built in 1961 and stands at 604 feet, making it the tallest structure in Seattle. In addition, there is a restaurant at 500 feet called SkyCity, which rotates 360 degrees during lunch and dinner.

4. Despite being known as a technology hub, the timber industry is what began the city’s economic growth and is still a significant industry today.

5. Microsoft is one of the biggest employers in Seattle, and its campus is located in Redmond (North East of Seattle), not far from Bill Gates’ house. The company began as a programming language and has grown to be the world’s largest software company. Here are three examples of Microsoft products: word, windows, and excel.

6. Among many other companies, such as Microsoft, Seattle is also famously known for being the world headquarters of Amazon.com and Starbucks (the world’s largest coffee chain).

7. The company that rules our sky, Boeing, was founded in Seattle, even though they moved their headquarters to Chicago. They still have offices in the city.

9. The Seattle area is home to one of the most extensive urban forests in the United States, spanning more than 1,275 square miles.

10. The Seattle-Tacoma International Airport is the hub for Alaska Airlines and Delta Airlines. It was constructed in 1944 by the Port of Seattle.

11. Among all the large cities in the US, the city of Seattle holds the record for having the most days above 80 degrees Fahrenheit in a year at 142 – beating out other cities like New York City and Los Angeles by a substantial amount.

12. Seattle has a rainy climate with frequent rainfall between October and April, but it also has good weather in the summer, with many sunny days from June to September.

13. At one point, Seattle was the fastest-growing city in the country, but cities like San Antonio and Austin have since surpassed them.

14. Even though they lost the NBA’s Seattle Supersonics to Oklahoma City (now the Thunder), they still have the Seattle Storm (WNBA) and the Seahawks (NFL). The city is a major sports city, and it is just a matter of time until they get an NBA team again.

15. If you like Opera, check out the Seattle Opera, one of the most prominent opera companies in the United States. They hold performances from August-May. 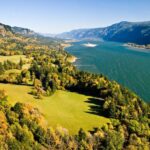