Rolling prairies give way to the dramatic Black Hills National Forest in South Dakota, a sprawling, a sparsely populated state in the Midwest. Mount Rushmore, a depiction of the four presidents of the United States, and Crazy Horse Memorial, a monument to the legendary Native American leader, are two of the many historical monuments carved right into the mountainside.

Vérendrye brothers claimed the area for France in 1743 and were the first Europeans to settle there. The United States purchased about 827,000 square miles of land west of the Mississippi River in 1803 as part of the Louisiana Purchase.

As they surveyed land acquired in the Louisiana Purchase, Lewis and Clark traversed the newly acquired region on their way to the Pacific Ocean in 1804. 1889 saw the creation of two states from the Dakota Territory, which included what is now North Dakota.

Mount Rushmore is an enormous sculpture featuring George Washington, Abraham Lincoln, Thomas Jefferson, and Theodore Roosevelt in the Black Hills. They are all larger than life!

The state is bordered to the north by North Dakota, to the east by Minnesota and Iowa, to the south by Nebraska, and the west by Wyoming and Montana.

Midway through the state, the Missouri River runs north to south. Lakes, low hills, and fertile farmland are located east of the river in the Drift Prairie. The state’s southeast corner is home to streams and hills called the Dissected Till Plains.

Black Elk Peak, the highest point in the state, is 7,242 feet high and part of the Black Hills range in the southwest. Tribes of the Northern Cheyenne, Omaha, and Lakota revere this area. Two-thirds of the state is covered by the Great Plains, which feature canyons and flat-topped hills known as buttes. Among its fossil beds are the Badlands, where explorers have found remains of saber-toothed cats, three-toed horses, and marine animals from an ancient sea.

Due to its fertile soil, agriculture is South Dakota’s number one industry. The most common crops are corn, wheat, soybeans, and sunflowers, which produce seeds.

South Dakota is also known for its mining industry. It was once one of the nation’s top gold spots, but today its most valuable mining resources are construction materials such as limestone, granite, sand, and gravel.

Some Fun Facts About South Dakota

Mount Rushmore is visited by more than 3 million people every year.

Tom Brokaw, Crazy Horse, Laura Ingalls Wilder, Calamity Jane, and Sitting Bull are among those who have lived in South Dakota.

The Crazy Horse Memorial began in 1948 and is still being carved in the Black Hills. Upon completion, the statue will be 563 feet tall, almost twice as tall as the Statue of Liberty. 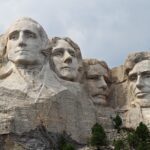