Located in the United States Pacific Northwest, Washington is officially designated as the State of Washington. Washington is named for George Washington, the first U.S. president. Washington was created in 1846 after the British Empire ceded the Washington Territory following the Oregon Treaty to settle the Oregon boundary dispute.

About 10,000 years ago, people began living in what is now Washington. Land bridges that connected North America with Asia may have been exposed when water levels dropped during the last Ice Age. Many Native American tribes, including the Yakima, Chinook, Nez Perce, and Puget Sound Salish, have inhabited the land thousands of years later.

European explorers first visited the area in the 1700s but only stayed ashore after returning to their ships. William Clark and Meriwether Lewis, the first Americans on an expedition to explore the West, arrived here in 1805, but they soon headed back east. Early in the 19th century, this region was jointly owned by the British and Americans.

1846 saw the signing of a treaty that divided the land between the two nations. Oregon Territory was established, including the land that would become Washington. The British acquired control of Canada to the north. Washington state was created in 1889.

Washington was named after George Washington, the first president of the United States.

Its nickname, the Evergreen State, comes from the many forests that cover more than half the state.

The state of Washington is located in the northwest corner of the contiguous United States (which excludes Alaska and Hawaii). British Columbia borders it in the north; Idaho in the east; Oregon in the south (the Columbia River forms most of this state’s border); and the Pacific Ocean in the West.

Geographically, the land can be divided into six regions. Olympia Mountains lie in northwest Washington, bordered on the north by Juan de Fuca Strait and on the West by the Pacific Ocean. There are lush rainforests in this wet region. Some parts of the Olympic National Park have yet to be explored. However, most of this region is in Olympic National Park.

There are forests and beaches along the coast of the Coast Range area, located in Washington’s southwest corner.

The Puget Sound Lowlands lie east of the Coast Range, with river valleys, harbors, and the state’s major cities. Scientists have no idea what caused the low, flattened hills in this area known as Mima mounds, but theories range from gophers to earthquakes.

Mt. Rainier, the tallest mountain in the Cascades, lies to the east. The highest point in the contiguous United States is 14,410 feet above sea level. Nearby Mount St. Helens is also high. In 1980, this volcano experienced one of the most significant eruptions in the lower 48 states.

South-central Oregon contains the Columbia Plateau. Located in the world’s most extensive lava plateau, the area has steep, dry canyons called coulees and patches of dry lava called scablands. A topographic place called the Blue Mountains rises in the state’s southeast corner. Loess is a windblown sediment composed of silt and clay found in the Palouse Hills and elsewhere in the southeast.

In the northeast corner of the state, there is a portion of the Rocky Mountains. This region also includes the Columbia Mountains.

Olympic marmots, bighorn sheep, and gray wolves are located here. A birdwatcher may see an osprey, a bald eagle, a goldfinch (the state bird), plus water birds such as albatrosses and puffins. Amphibians in Washington include Pacific giant salamanders and Pacific chorus frogs. Among the state’s reptiles are pygmy short-horned lizards and sharp-tailed snakes.

Since half of Washington state is covered in forests, it’s no surprise it’s one of the country’s biggest lumber and plywood producers. Gold, lead, and aluminium are also mined in this state.

Some Fun Facts About Washington 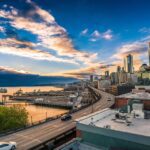