Honolulu is the capital and largest city of the U.S. state of Hawaii. The city is located in the City & County of Honolulu on the southeastern coast of the Hawaiian Islands, about halfway between San Francisco, California and Tokyo, Japan. Honolulu covers 68.4 square miles (177.2 km2), with an estimated population of over 360,272 as of 2021, making it the largest city in Hawaii.

Below, you will discover 15 facts about Honolulu, its culture, history and more.

1. Located on the paradise island of Hawaii, Honolulu is one of the most expensive cities in the United States. The average household income for Honolulu is $60,000 a year. Therefore, the average cost of living in Honolulu is about $3,500 per month.

2. The city you see today has been settled as far back as the 11th century by various Polynesian tribes.

3. A British Captain by the name of William Brown was the first person to arrive on the shores of Honolulu in 1794.

4. Honolulu was only sometimes the capital city of Hawaii; that honor belonged to Kailua-Kona in 1812. The same year the United States invaded Canada.

6. The city of Honolulu consists of 4 districts; Ala Moana, Kalihi, Downtown and Waikiki.

7. The Honolulu Symphony is one of the oldest orchestras in the United States, founded in 1900.

8. The Honolulu Marathon started in 1973 and occurred annually on the second Sunday in December. The event was established to educate the public about heart disease. At 26.2 miles, it is one of the longest marathons in the world.

9. Waikiki Beach is one of the world’s most famous beaches and attracts millions of tourists yearly, along with its famous hotels and resorts. Over 50,000 people come to this beach every day. In addition, more than 80 other beaches surround the city.

10. Opened in November 1992, Kakaako Waterfront Park is one of the most beautiful parks in the United States and a huge tourist attraction. It is 35 acres and adjacent to the ocean for some breathtaking views.

11. Here is another surprising fact, Honolulu has over 30 Buddhist temples throughout the city.

12. The city is the only one with a royal palace in the country!

13. Honolulu’s ruler was Queen Liliuokalani, who ruled from January 29, 1891, to January 17, 1893, when the Provisional Government asked the United States to help overthrow her.

14. The city is home to one of the world’s largest Chinatowns.

15. One of Honolulu’s most “must-visit destinations” is Diamond Head. It is an extinct volcano, offering fantastic views of the city and surrounding areas. 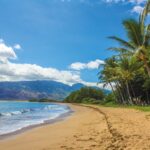