Atlanta is the capital and most populous city of the U.S. state of Georgia and was founded in 1845 as a railroad terminus. It was officially established as the city of Atlanta on December 29, 1847. Atlanta is an international city with a population of over 506,811 people, and it has been rated as one of the world’s most livable cities. Atlanta is the cultural and economic hub of Georgia and the Southeast United States.

2. It is the capital city of the state of Georgia and the state’s largest city, with a population of around 506,821.

3. It is home to the world-renowned Georgia Aquarium, one of the world’s largest aquariums.

4. The city has a humid subtropical climate characterized by hot, humid summers and mild winters.

5. The world-famous Coca-Cola drink was invented in Atlanta – on January 29, 1982. Atlanta is also the place where the first Coca-Cola was sold.

6. But it is NOT THE FIRST capital city of Georgia; that honor belongs to Savannah.

7. The Phoenix is Atlanta’s official symbol – back in the 1860s, the city was burnt to the ground by General Sherman in an act of war. Only about 400 buildings survived. So Phoenix – the city’s symbol – represents the city’s complete reconstruction.

8. The Hartsfield–Jackson Atlanta International Airport is the busiest in the world. It is the hub for Delta Air Lines – the world’s largest airline hub. The Airport services over 1000 flights per day.

9. With over 100,000 shade trees planted, Atlanta is the most heavily forested urban area in the United States.

10. Many streets and buildings have the name “Peachtree” in them, even though the city does not have any peach trees.

11. The Bank of America Plaza in Atlanta is the tallest building in the U.S. outside of New York City and Chicago.

12. Atlanta is the music capital of the United States. So many record labels, bands and some of the most prominent musicians, such as Waka Flocka, Ludacris, Gucci Mane, and many others, call Atlanta home. So if you want to launch your music career and network, Atlanta is the best place to be – not Los Angeles.

13. Nicknamed “Hollywood of the South”, – Atlanta’s movies and television production industries keep growing, ranking in the top 3 in the country after Los Angeles and New York City. To name a few, movies such as Insurgent, Driving Miss Daisy, Captain America: Civil War, Guardians of the Galaxy 2 and many others were produced in Atlanta.

14. Atlanta has many fortune 500 companies headquartered there – 3rd most in the U.S. CNN is headquartered in Atlanta. In addition, the Atlanta Police Department shares the same building as CNN.

17. The Atlanta Zoo is home to the largest populations of gorillas and orangutans in the U.S.

19. In the heart of Atlanta, you will find the historic Oakland Cemetery. That is the resting place for many famous people, such as Margaret Mitchell (novelist) and many Civil War veterans.

20. Atlanta was featured on The Discovery Channel’s show “America’s Worst Driver” – it ranked #3 after Los Angeles and New York City!

Like or didn’t you like these facts about Atlanta? Request a correction now, and we will fix it as soon as possible. 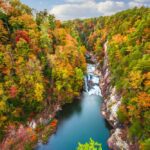